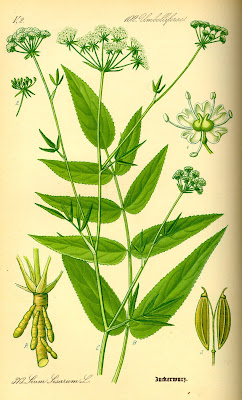 Put 125 g of bacon, chicken giblets of one chicken, and 8 garlic cloves into a stewing pan with 1 litre of water and cook 30 minutes, skimming often. Strain and reserve the bacon and giblets. Put the stock in a clean stewing pan with 3 cups (750 ml) of water. Add 500 g of green or brown lentils, 3 teaspoons of salt, and half a teaspoon of ground ginger. Chop the giblets and add this to the pot. Chop part of the bacon, enough to yield half a cup (50 g) and add this to the lentil mixture.

— Reconstructed from a Medieval recipe from Poland.[6]

Take skirrets, parsnips and apples, and parboil them. Make a batter of flour and eggs. Cast ale, saffron and salt into it. Wet them in the batter and fry them in oil or in grease. Pour on almond milk and serve it forth.

Take a quarter of a peck of Skerrets blanched, and sliced, season them with three Nutmegs, and an ounce of Cinnamon, and three ounces of Sugar, and ten quartered Dates, and the Marrow of three bones, rouled in yolks of Eggs, and one quarter of a pound of Ringo roots,[b] and preserved Lettice, a sliced Lemon, four blades of Mace, three or four branches of preserved Barberries, and a half a pound of Butter, then let it stand one hour in the oven, then put a caudle made of white Wine, Verjuyce, Butter, and Sugar, put into the pye when it comes out of the oven.

— From Elizabeth Grey, Countess of Kent, A True Gentlewomans Delight, 1653

Take your skirrets and boil them, skin them, then cut them to lengths about two or three inches. Wash them with yolks of eggs and season with salt, ginger, cinnamon, nutmeg. Put to them some chestnuts boiled and blanched and some yolks of hard-boiled eggs split, and lay over some sliced lemon. Put over butter and close it in a raised coffin.[c]

— From The Receipt Book of Joseph Cooper, Cook to Charles I, 1654

Boil your biggest skirrets and blanch and season them with cinnamon, nutmeg, and a very little ginger and sugar. Your pye being ready lay in your skirrets; season also the marrow of three or four bones with cinnamon, sugar, a little salt and grated bread. Lay the marrow in your pye and the yolks of hard eggs, a handful of chestnuts boiled and blanched, and some candied orange-peel in slices. Lay butter on the top and lid your pye. Let your caudle be white wine and sugar, thicken it with the yolks of eggs, and when the pye is baked pour it in and serve it hot. Scrape sugar on it.

Take the largest skirrets you can get & parboyle them & peel them & season them with cinnimon & powder sugar & put them in a dish with a good deal of fresh butter & some sliced citron & candid orange peel & candid eringoroot, 3 spoonfuls of rose water, 4 of white wine, some Jerusalem hartichokes boyled & sliced. Make it with cold butter paste. When it coms out of the oven, have ready a caudle made of half a pint of sack, some sugar & nutmeg & the yolks of 4 eggs & a print of butter poured on it very hot & the lid laid on it again.

— From The Cookbook of Unknown Ladies, circa 1761

To a pint of pulp of skirrets add a spoonful of flour, the yolks of four eggs, sugar and spice. Make them into a thick batter, and fry them quick.

— From John Farley The London Art of Cookery, and Housekeeper's Complete Assistant. 1789